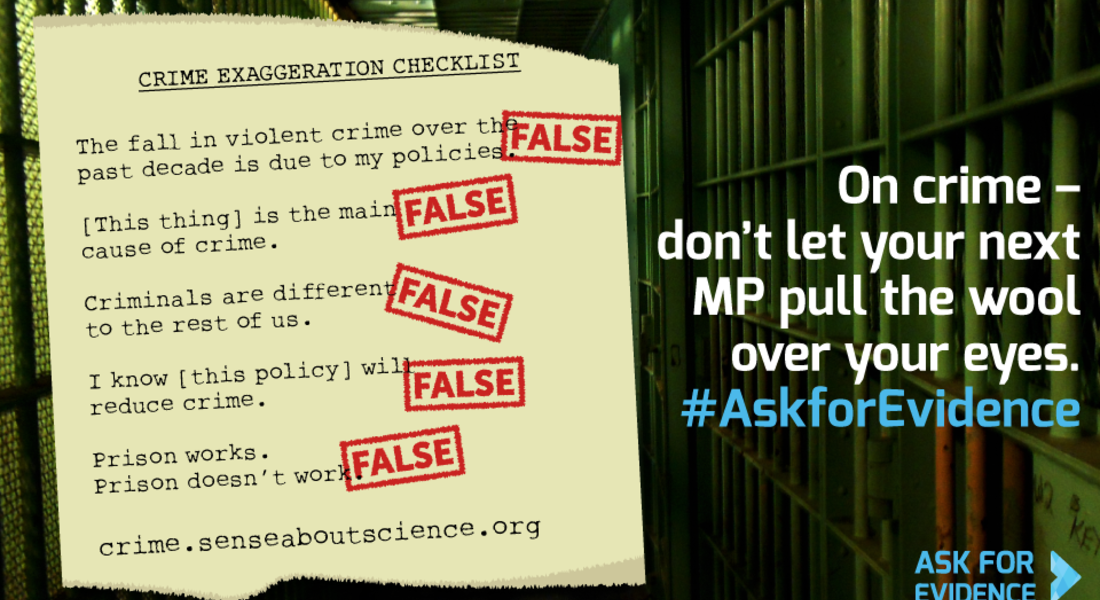 Too much crime fiction at the election

Ask politicians for evidence on their crime policies

Too much crime fiction at the election

Crime is one of the main issues people are concerned about in this election. But politicians have been telling us fictions about crime. The general election manifestos of five of the UK’s biggest parties make promises to cut crime by putting more bobbies on the beat (Labour), introducing tougher prison sentences (Conservatives) or tough community sentences (Liberal Democrats), reducing unemployment (Green Party) or deporting foreign criminals (UKIP). These policies aren’t supported by any evidence. And politicians should know this.

Experts have come together today to set out why broad statements about crime are nearly always wrong. Sense About Science's new guide Making Sense of Crime sets out insights from crime research. These include that most types of crime are falling across developed countries and have been for around 25 years, so individual policies don’t have a big effect. They explain that politicians are wrong to say the criminal justice system will cut crime, when it’s relevant to just 2% of crimes. The most effective ways to cut crime might lie outside the criminal justice system such as designing cars that are harder to steal and houses that are more difficult to break into. These initiatives have been shown to reduce car theft and burglary. Aren't these the things we'd rather politicans paid more attention to?

Our Crime Exaggeration Checklist helps you spot the statements that are catchy slogans in place of policies that will actually work. So if your candidate is making any of the crime claims in the checklist …

… then ask them why they are backing policies that don’t work and will only divert resources from proven ways to cut crime.

As there is an election coming up, this is the time we get to hold those in power to account and that surely includes making sure politicians are telling the truth about evidence. Here’s how you can tell your next MP that not having evidence simply isn’t good enough.

We like reading crime fiction, but not in election manifestos.