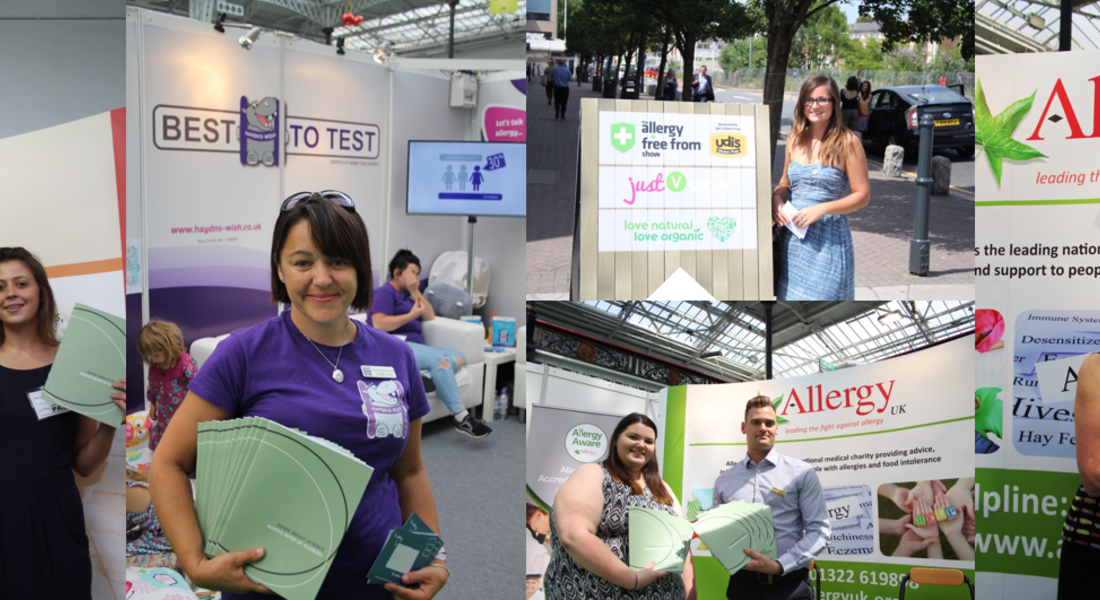 We visit an allergy trade show to Ask for Evidence

Asking for evidence at the Allergy and Free From Show

We visit an allergy trade show to Ask for Evidence

To coincide with the launch of Sense About Science’s public guide Making Sense of Allergies, I helped out with Voice of Young Science’s campaign to Ask For Evidence on Allergy Tests and Treatments. So when I heard about the Allergy and Free From Show, I decided to head down to see what kinds of claims were being made about the products on offer. Could asking for evidence help cut through some of the confusion about the testing and treatment of allergies?

The Allergy and Free From Show was held over the weekend at London’s Olympia conference centre, with stands from allergy charities and allergy testing companies, as well as free-from food companies (e.g. gluten free, wheat-free) and product manufacturers.

The majority of the stands at the show were for food products, with a large contingent of organic food sellers, and there were plenty of claims being made that would have been interesting to look into. However, there were two claims that really caught my eye which I decided to Ask For Evidence on:

BHR, a company which offers a wide range of home allergy test kits, had a large stall right at the show’s entrance. One of the tests they were offering to visitors for £10 was a coeliac test, the Biocard Celiac Test. Coeliac disease is not an allergy, but having read about the lack of evidence behind over the counter allergy tests, I decided to Ask For Evidence behind how this test worked.

I also came across a stand for Enterosgel while wandering around the large show room. The gel claimed to “cleanse the gut from toxins, allergens and pathogens”. These claims seemed too good to be true so I decided to Ask For Evidence behind how it worked.

Fortunately, the people staffing the stands were kind enough to let me film them:

VIDEO 2: Ask for Evidence behind Enterosgel

We sent these responses off to allergy experts to see if the responses stack up.

Stuart Jones, Clinical Biochemist and Technical lead for LabTestsOnline UK, evaluated the evidence behind the Biocard Celiac Test and this is his response:

“They claim the product is CE marked – the EU stamp of approval shows that a test measures what is says it measures – although their website is a little thin on detail and so this would need to be confirmed. Although, CE marking itself does not tell you how accurate a test is and does not guarantee that it clinically valid.

"Having said that, this test does appear to be a clinically valid test, measuring the recommended antibodies for the diagnosis of coeliac disease (anti-tissue transglutaminase (tTG) IgA antibodies).

"Of course a key point here is that home testing is not necessary as coeliac testing is available on the NHS for free, where tests are always performed by an accredited laboratory. Sense About Science’s Making Sense of Testing guide has some useful information on the risks of home testing.”

So the evidence seems to back up the claims.

Dr Isabel Skypala, Consultant Allergy Dietitian at the Royal Brompton & Harefield NHS Foundation Trust, evaluated the evidence behind Enterosgel and this is her response:

“I have reviewed all of the claims and papers in the literature on their website again. I have not seen any convincing evidence that this product is of any use in the treatment of food allergy. It is not a recognised treatment by any current allergy organisations and I would not recommend it to my patients. Cleansing the gut of toxins has not been shown to be a beneficial treatment for the management of food allergy.”

So their claims don’t seem to stand up.