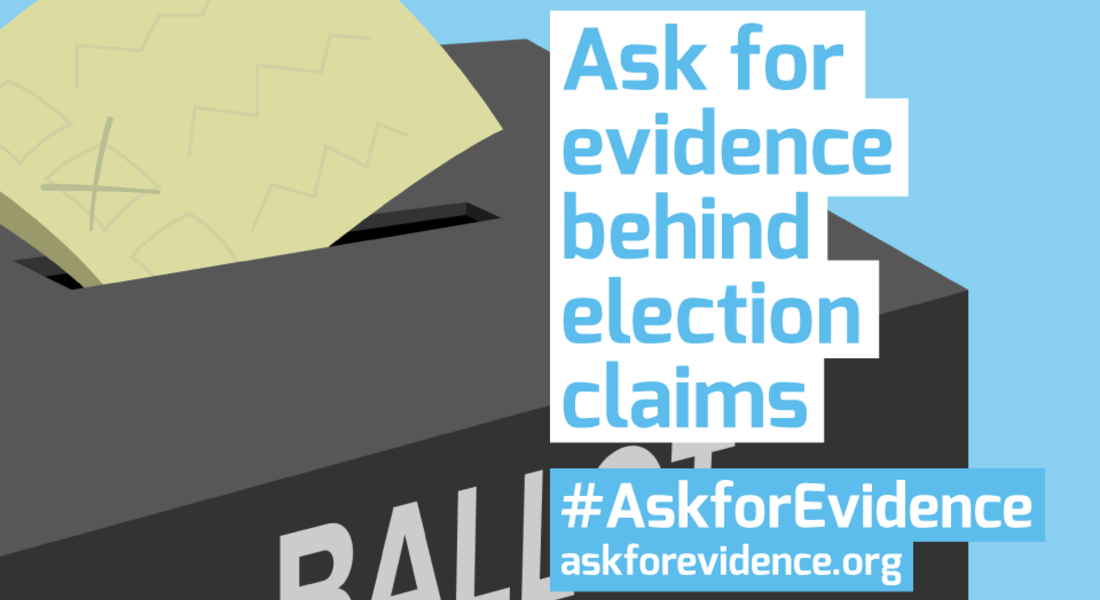 Ask your next MP for evidence

26 days until the UK general election

Ask your next MP for evidence

The UK General Election campaigns are in full swing. Candidates and their parties are sending out leaflets, talking to the press and publishing manifestos to tell us how their policies beat their rivals’. They’re asking us to vote for them because, they claim, their ideas will save public money, make us healthier and better educate our children.

People are showing politicians that they aren’t going to take those claims at face value. They’re asking for evidence for election claims and showing their candidates that they expect that claims are based on some kind of evidence.

Elle asked Chuka Umunna for evidence behind his claim that “It takes on average a British worker until Friday to do what equivalent workers in Germany and France will complete by the end of Thursday afternoon.”

Charles asked his local UKIP candidate for evidence that leaving the EU would amount to savings of £8bn per year.

Harry has asked his Green Party candidate for evidence about the claim that a reliance on animal testing and experimentation increases the risks of adverse reactions and hampers progress.

Ralitsa has asked for evidence behind Conservative Party plans to remove sickness benefits from people who are overweight or suffering addiction problems and do not accept treatment.

Georgina asked Iain Duncan Smith for the evidence behind his suggestion that people claiming Universal Credit are five per cent more likely to find employment within four months compared to those claiming Jobseekers Allowance.

Ask your local candidates for evidence. Show them that you care whether they know if the claims they're making can be supported or not. Make asking for evidence part of how you interact with what might be your next MP. If you're not sure how to get started read How to ask your next MP for evidence.